Behind every great man there is a great woman 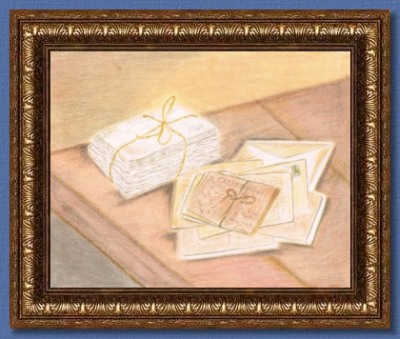 Jo could simply have abandoned her bequest...
In the year 1889, a young Dutch woman married a Dutch man called Theo van Gogh. Theo was 31 years old and a successful art dealer in Paris. The young Dutch woman was Johanna Bonger. Johanna
- or Jo - was 26 years old and a teacher of English. Within two years
of their marriage Theo died.
Theo left Jo with little in the way of an inheritance except: a baby; their apartment in Paris; a huge quantity of paintings by his brother Vincent; and an enormous archive of letters, mainly from that same eccentric brother. The eccentric brother Vincent - an unsuccessful
artist - had just died 6 months previously.

After Theo's death Jo sold the apartment in Paris, bought a villa at Bussum near Amsterdam and set up a boarding house. This provided the income for her and her son Vincent William in the short term. In addition, she translated short stories from French and English into Dutch, earning her some extra income.
But her aim in life was the promotion of Vincent and his work. She did this through sales, exhibitions and writings. By the early 20th century she had sold about a 100 works of the more than 300 or so she had inherited. She then organised a colossal retrospective at the Stedelijk Museum in Amsterdam, thus cementing Vincent's reputation.
Her short but fascinating writings about her now-celebrated brother in law set the tone and image of the artist for years to come. Even today, in many respects we think of Vincent van Gogh as Jo van Gogh presented him.

Jo could simply have abandoned her bequest: consigning both Vincent's works and words to the attic or to the late 19th-century equivalent of a skip. Instead, she devoted the remaining three and half decades of her life to do what her husband, a successful art dealer, couldn't and show the world that Vincent van Gogh had been a very great artist. It is as they say:
Behind every great man, there is a great woman.
The End

Other Short Stories and Tales to read online  >>